Aloe Vera is a common household remedy and a $13 Billion industry worldwide.

It’s a plant that you can find growing wild all over the world—and one of the most widely-used natural products in the Western World. Looking at where Aloe is today, it would be easy to assume that it’s just always been there for us.

By comparing the DNA sequences and genetic data of some 200 different species of Aloe, the team at Kew Gardens was able to discern not only the origin of Aloe as a species (which was in Africa) but they were also able to see how the plant adapted and spread throughout subsequent millions of years.

So today, we’re going to take a quick look at Aloe Vera’s fascinating origins, and find out how this wonder-plant has grown and adapted and served the needs of men and women century after century. 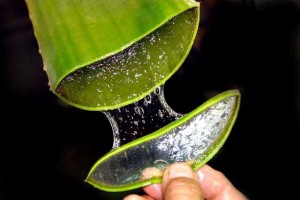 Born in the Cradle of Mankind (But Before Mankind)

Thanks to precise testing, scientists were able to pinpoint the origin of Aloe Vera with a plant that grew in Southern Africa some 19 million years ago—in an age of history now known as the “Miocene.”

As the continent warmed in the wake of an ice age, the plant began to grow up the coast and into the Horn of Africa. While it wasn’t yet what we’d call “Aloe Vera,” it was developing into a diverse family of plants, a whole spectrum of resilient, vitamin-rich plants that would eventually die out.

It wasn’t until the plant reached the Middle East that it became what we now know as Aloe Vera. The plant offered an incredible density of vitamins, minerals, amino acids and other beneficial compounds that made it an immediate success with local human populations …

In Egypt, the plant was immortalized in hieroglyphics—chiseled into walls and referred to as “the Plant of Immortality.” The people of Mesopotamia believed that Aloe could ward off evil spirits. The Knights Templar even drank a kind of palm wine with Aloe in it that they believed to have boosted their health during the Crusades.

Early traders took the plants along to use for their own medicinal purposes. The plant’s resilience and its usefulness as a free natural remedy for things like sunburn and soreness resulted in traders toting the plant all over the world—all the way to places like India by 600BC, and eventually on to the Americas.

Into the 19th and 20th Century, some had begun to doubt the effectiveness of Aloe as a natural remedy, but it was soon realized that shipping the finished product greatly reduced its potency. Aloe had to be administered fresh from the plant in order to offer maximum benefit.

That’s a large part of the reason why it spread so successfully and so quickly—because in order for it to be effective, the entire Aloe Vera plant had to be transported.

So scientists struggled all the way into the 1970s, when a method was finally discovered that could preserve all the plant’s beneficial compounds while making it safe for storage and transport. Soon after, Aloe-based lotions hit the shelves in American supermarkets and became an instant hit.

Carrying Aloe into the 21st Century

It’s almost amusing that despite all our innovation, despite all our healthcare and exciting new medicine—humans still love the organic, all-natural remedy that is Aloe. And why not? After all, it’s worked for thousands of years.

We’re even finding all new uses for it …

Like using Aloe as a regenerative healing mask at the end of a long day … or ingesting it to aid with heartburn and digestive trouble. While that last one might sound strange to some people, it’s actually becoming more and more popular—as new scientific studies prove that the Aloe Mucilaginous Polysaccharides (AMP’s) in in Aloe Vera extract offer a wide spectrum of nutrients, anti-inflammatories and other beneficial compounds.

By taking a concentrated extract of this highly effective natural remedy (Like AloeElite, which condenses 30lbs. of raw Aloe into each individual bottle), many report a number of impressive and lasting benefits—from gastrointestinal relief to increased energy and immune health.

Try AloeElite for yourself today (and save $60 or more!)